GF grew again double-digit in 2018 to reach CHF 4'572 million. Free of acquisitions, divestments and currency effects, growth amounted to 7%, well above the 2020 strategy objectives of 3-5% per annum. The main pillar of organic growth has been GF Piping Systems, recording a high 8% organic growth rate for our largest division. The Corporation increased sales in all three regions Europe, Asia and America with America growing the most. After a very strong first semester, markets were affected during the second half-year by the ongoing trade tensions, which led to a softening of the GF growth rate.

The operational result (EBIT) increased by 9% to CHF 382 million. Both GF Piping Systems and GF Machining Solutions are the drivers of this increase.

GF achieved a net profit after minorities of CHF 281 million, an increase of 12% compared to 2017 and a free cash flow before acquisitions of CHF 147 million (previous year CHF 204 million), basically at the lower end of GF's target range of CHF 150-200 million. The main difference with previous year comes from future-oriented investments, namely in the new production facility of GF Machining Solutions in Switzerland and the new US light metal foundry of GF Casting Solutions.

Earnings per share reached CHF 69, compared to CHF 62 in 2017. In view of the positive financial development in 2018, the Board of Directors will propose at the upcoming Annual Shareholders' Meeting an increased dividend of CHF 25 a share, up from CHF 23 in the previous year. 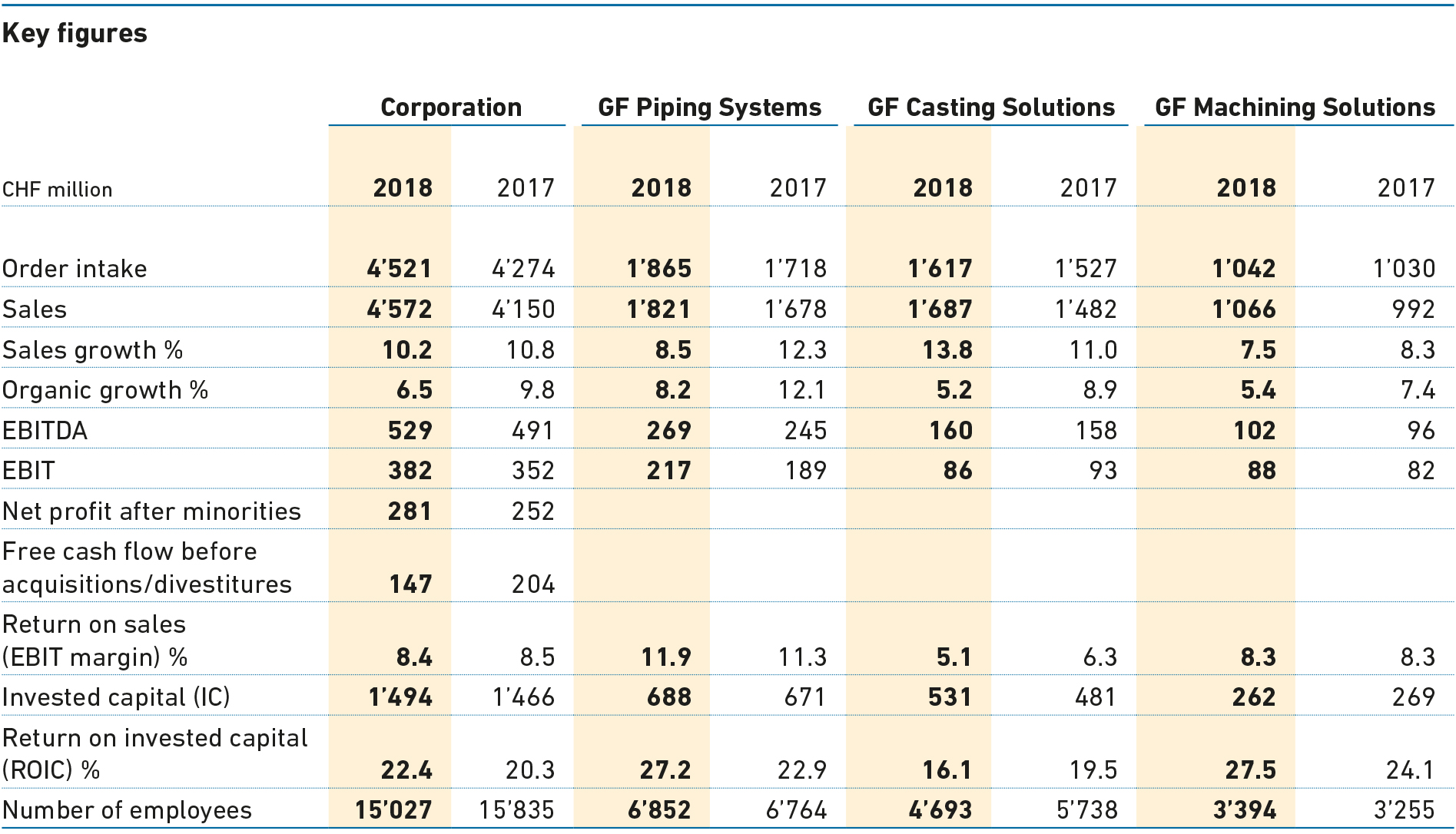 GF Piping Systems
GF Piping Systems increased its sales by 9% to CHF 1'821 million. Organically the division grew by 8%. In 2018, the American and European operations of GF Piping Systems were the main growth contributors, whereas growth was muted in China as the ongoing trade disputes affected customer sentiment. The division generated an EBIT of CHF 217 million, 15% above the previous year. The EBIT margin reached 11.9%, compared to 11.3% in 2017, as most plants were well-loaded and the sales of high-value products increased again over-proportionally.

GF Casting Solutions
GF Casting Solutions (formerly GF Automotive) also increased its sales in a significant manner to CHF 1'687 million, up 14%. The major growth drivers were the acquisitions of Precicast Industrial Holding SA (Switzerland) in April 2018 and of Eucasting Ro SRL (Romania) in November 2017. Organic growth stood at 5%. After a solid first half-year, the automotive industry in Europe suffered during the second half from new emission registration rules leading main car manufacturers to temporarily reduce production. The division's operating result stood at CHF 86 million, compared to CHF 93 million in 2017. On one hand, the ramp-up of the new light metal foundry in the US had, as expected, a strong negative impact on profit and on the other hand, plant load suffered at year end from the reduction of customer call-offs.

GF Machining Solutions
Order intake at GF Machining Solutions was slightly above the previous year, with America showing a strong growth, whereas the Chinese market became softer during the second half year as trade frictions affected customer sentiment. The division increased sales by 8% to CHF 1'066 million, organically +5%. The main drivers for the sales increase have been the aerospace and medical industries in Europe and the US. The operating result increased by 7% to CHF 88 million, resulting in an unchanged ROS of 8.3%.

Portfolio actively reshaped towards higher value businesses
During 2018, the portfolio of GF Casting Solutions has been reshaped to intensify the focus on growing and promising fields such as light metal components for the automotive industry and precision castings for aircraft engines and gas turbines. Accordingly, the two large iron casting plants in Singen and Mettmann (Germany) have been divested in December to three experienced managers of GF Casting Solutions.

Outlook
Macroeconomic conditions have become even more uncertain and volatile during the last few months. Chances are however intact, barring unforeseen circumstances, to pursue our positive development.

At GF Piping Systems, a high number of new products are being launched such as a whole line of digital valves, whilst promising market segments are being developed, like the cooling of data centers. GF Casting Solutions expects a clearly improved operating performance. The division begins the year with a reshaped portfolio and a large amount of orders worldwide. In addition, its new light metal joint-venture, GF Linamar, in the US is rapidly increasing production. GF Machining Solutions expects a steady growth in the aerospace and medical sectors. Automation orders keep growing and the division recently launched new technologies such as promising 3D printing systems and digital services.

Moreover, the weight of the most profitable division, GF Piping Systems within the Corporation has continued to significantly increase to almost 50% of total sales.

For GF overall, 2020 strategy growth objectives remain unchanged at 3-5%. Regarding profitability, reinforced through the portfolio reshaping of GF Casting Solutions, the objectives for the current 2016-2020 strategy have been increased to 9-10% (from 8-9%) for the ROS and 20-24% (from 18-22%) for the ROIC.

GF comprises three divisions: GF Piping Systems, GF Casting Solutions, and GF Machining Solutions. Founded in 1802, the Corporation is headquartered in Switzerland and is present in 33 countries with 140 companies, 57 of them production facilities. Its 15’027 employees generated sales of CHF 4’572 million in 2018. GF is the preferred partner of its customers for the safe transport of liquids and gases, lightweight casting components, and high-precision manufacturing technologies.

You will find further information at www.georgfischer.com.

You can register for our subscription service for journalists at georgfischer.com/subscriptionservice. You will then automatically receive our latest media releases.