The geopolitical uncertainties affected the global economy in the first half of 2019 and have become even more evident in the second semester of the year. The trade tensions between USA and China, the lengthy Brexit discussions, ongoing confrontations in the Middle East region and in particular, the transformational change in the automotive business led to economic headwinds. As a consequence, the business sentiment in key industries and markets was affected by these uncertainties, creating a more challenging environment for GF.

GF sales amounted to CHF 3'720 million (2018: CHF 4'572 million), a decline of 18.6%. The development was primarily due to the proactive withdrawal of GF Casting Solutions from the iron casting activities in the European automotive industry and negative currency effects of CHF 88 million. Organically, sales decreased by 4.1%. The organic decline in the second half of the year decelerated to 2.5% versus a 5.5% decrease in the first semester 2019. Whilst GF Piping Systems grew organically by 1.3%, sales of GF Casting Solutions and GF Machining Solutions organically decreased by 9.7% and 7.5% respectively. GF increased the top line in the Americas, whereas markets in Europe and Asia recorded a lower sales volume.

The operating result (EBIT) amounted to CHF 281 million before one-off items compared to CHF 382 million in 2018, equal to an EBIT margin (ROS) of 7.6% (2018: 8.4%). Including  one-off items amounting to CHF 46 million in connection with initiated structural adjustments of GF Casting Solutions, the EBIT was CHF 235 million (EBIT margin 6.3%).

GF's net profit after minorities amounted to CHF 173 million (2018: CHF 281 million). The free cash flow before acquisitions reached CHF 137 million, which is CHF 10 million below previous year's level. Earnings per share reached CHF 42 compared to CHF 69 in 2018. The Board of Directors will propose at the upcoming Annual Shareholders' Meeting a dividend per share of CHF 25 on strong previous year's level. GF is well positioned in its markets and the focus on less cyclical market segments has increased the resilience of GF to economic slowdowns. These efforts will be pursued in the years to come. 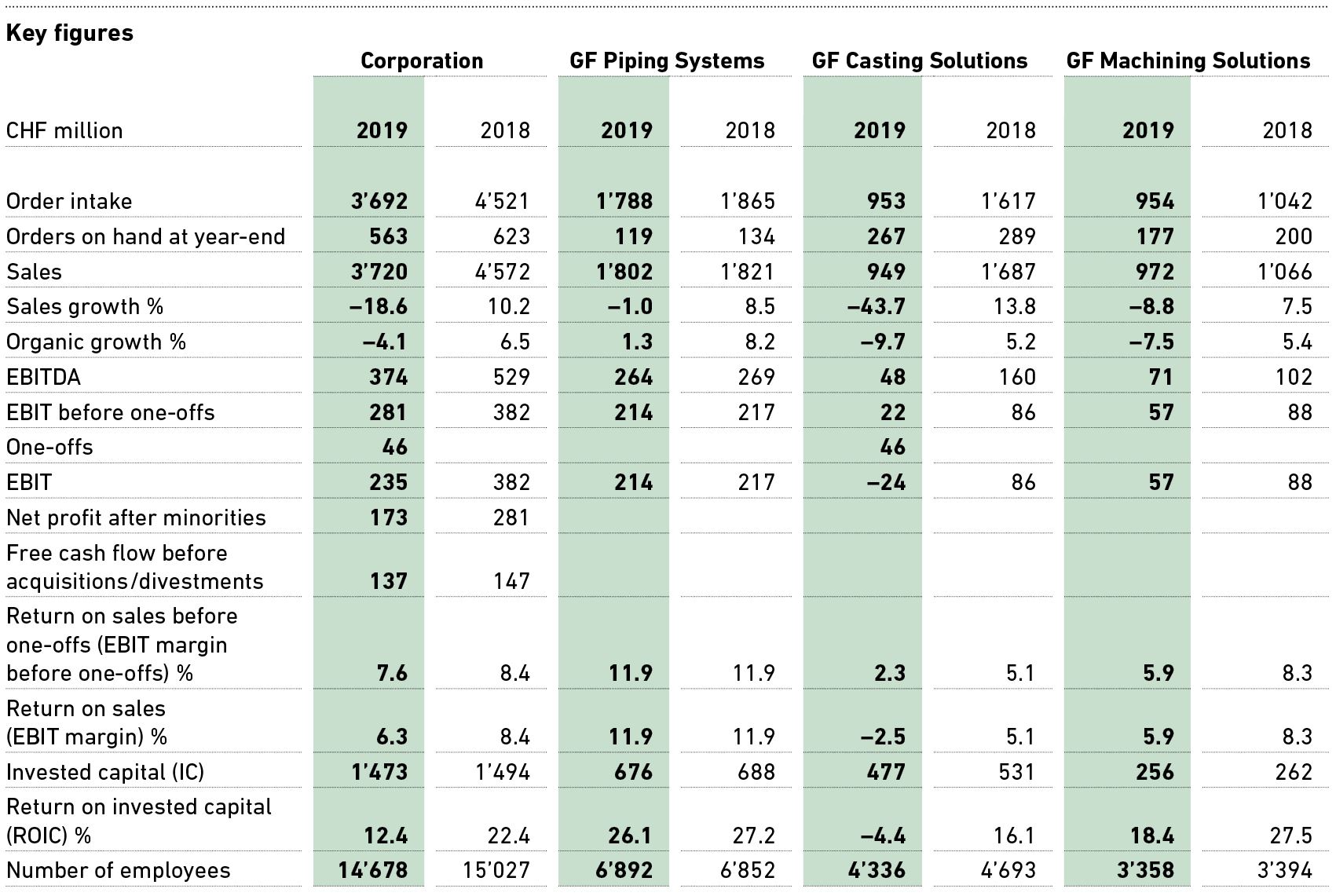 GF Piping Systems
GF Piping Systems grew by 1.3% organically and was able to keep its sales at CHF 1'802 million on previous year's level. Headwinds from currency movements affected sales negatively by CHF 45 million. All three business segments Utility, Industry and Building Technology showed a strong performance in Europe, whereas the Asian and the US markets suffered from the ongoing trade tensions. China was slightly below previous year's level, since major infrastructure projects such as the “coal to gas program” continue to remain on hold.
The operating result stood at CHF 214 million (2018: CHF 217 million), for a strong 11.9% ROS, at the level of previous year. The continuous shift to higher value businesses with more digitalized solutions bears its fruits. The demand for clean water solutions remains on a high level, the pre-insulated Cool-Fit product line, developed for the transport of cooling media, experienced high growth and strong demand for datacenter projects and from other industrial customers.

GF Casting Solutions
In 2019, the performance of GF Casting Solutions was impacted mainly by the structural changes and market turmoil in the European automotive industry. In order to ensure the competitiveness in this new environment, the division has been swiftly implementing comprehensive structural and operating measures. The iron foundry divestment in Herzogenburg (Austria) with negative one-time costs of CHF 9 million and the partial relocation of the site in Werdohl (Germany) with costs of CHF 37 million led to overall one-off costs of CHF 46 million for 2019.
The new high-pressure die casting facility from GF Linamar in the US is well positioned with its manufacturing capabilities for lightweight structural components. The company was awarded with several large orders. The high order book required already an expansion of the operations, which was accomplished in June 2019. Consequently, the ramp-up costs for the new orders had a considerable impact on the result and amounted to CHF 16 million for the full year 2019.
Adjusted for divestments (CHF 633 million), sales fell organically by 9.7% to CHF 949 million. The significant drop of the automotive production in Germany (-7%) and China (-8%) is the main driver for the organic decline.
The operating result before one-off items dropped as a consequence to CHF 22 million (2018: CHF 86 million), resulting in a ROS of 2.3%. Including one-off items amounting to CHF 46 million in connection with initiated structural adjustments, the EBIT was CHF -24 million (EBIT margin -2.5%).

The strategic transformation, including the optimization of the footprint in Europe and the shift in new market segments such as aerospace and energy, is on track. The completion of this transformation is expected in 2021.

GF Machining Solutions
In the second half-year 2019, the demand for capital goods in Europe, spearheaded by Germany, but also in the US dropped. The Chinese markets for machine tools remained on previous year's low level.
GF Machining Solutions generated sales of CHF 972 million, an organic decline of 7.5% compared to the previous year. Businesses in China and Western Europe have been impacted the most, whereas the division was even able to grow in the US, based on the division's strong position in aerospace and medical technology. Innovations and a strong focus on the defined strategic market segments allowed the division to clearly outperform the North American market.
The reduction in sales and the lower utilization of production capacities affected the operating result. It fell from CHF 88 million to CHF 57 million, resulting in a ROS of 5.9% compared to a strong 8.3% in 2018.
Innovations in the field of new technologies such as laser texturing or additive manufacturing continued to see a high demand from our customers, growing 41% in 2019.
The ramp-up of the new milling innovation and production center in Biel/Bienne (Switzerland) has been successfully accomplished. The focus on operational excellence and innovation will remain the main driver for the development of the division.

Last year of strategy 2020 cycle / outlook
In the last year of its strategy cycle 2016-2020, GF will continue to focus on the implementation of its strategic thrusts and the acceleration of the strategic transformation at GF Casting Solutions. The structural shift within the automotive industry from traditional powertrain systems to hybrid and e-mobility concepts shows that the focus on lightweight structural components and parts for the energy and aerospace sector are the right moves. However, the transformation of the division is an ongoing part of the strategy and is anticipated to be finished in the year 2021.
GF Piping Systems will continue to shift its portfolio to higher value businesses. The broad global customer base and the focus on sustainable solutions resulted in a strong performance despite difficult market conditions. Innovations and solutions for the safe transport of liquids and gases will remain the key focus of the division.
At the world-leading machine tool fair EMO, GF Machining Solutions launched new digitalized solutions preparing the ground for further growth. The division's passion for customer-centric innovations remains the key driver for growth and profitability.

The economic and political uncertainties in the markets, including the operational and financial implications of the coronavirus, have grown and will most probably continue in the upcoming months. In 2020, GF will therefore strengthen its focus on innovation, speed and operational excellence and has proactively launched an agility program addressing these topics. These initiatives in the transition year 2020 will set a solid base for the new GF strategy cycle 2025. They will complement the initiated structural measures with the ambition to sustainably improve future results and thereby bring GF's performance back towards its strategic targets (EBIT margin 9-10%, ROIC 20-24%).

GF uses certain key figures to measure its performance that are not defined by Swiss GAAP FER. For that reason, there might be limited comparability to similar figures presented by other companies. Additional information on these key figures can be found here.

GF comprises three divisions: GF Piping Systems, GF Casting Solutions, and GF Machining Solutions. Founded in 1802, the Corporation is headquartered in Switzerland and present in 33 countries with 142 companies, 56 of them production facilities. GF’s 14’678 employees generated sales of CHF 3’720 million in 2019. GF is the preferred partner of its customers for the safe transport of liquids and gases, lightweight casting components, and high-precision manufacturing technologies.