Positive momentum continued in the first half-year of 2018 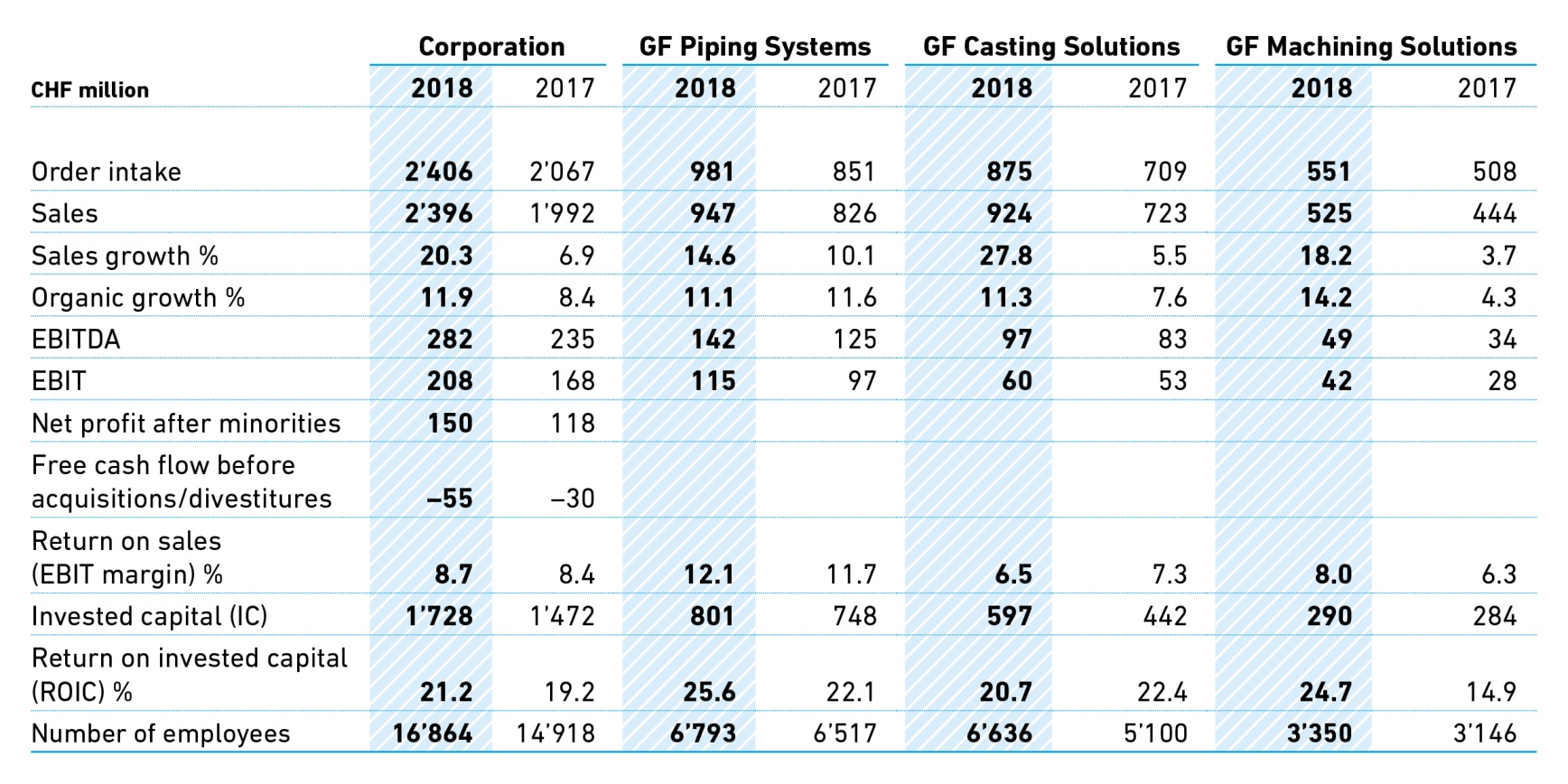 Amid positive economic developments worldwide, sales went up 20% during the first semester of 2018 to CHF 2’396 million compared to the same period of 2017. All three divisions did contribute to the increase. Free of acquisitions and currency effects organic growth stood at 12%. Following another semester of operating margin expansion, the operating result grew 24% to CHF 208 million. All three divisions increased their operating result (EBIT), most significantly GF Piping Systems and GF Machining Solutions. The operating margin or return on sales (ROS) improved from 8.4% to 8.7% and the return on invested capital (ROIC) went from 19.2% to 21.2%. Net profit after minorities increased by 27% to CHF 150 million. Seasonality-driven free cash flow before acquisitions stood at CHF −55 million, compared to CHF −30 million during the same period of 2017. For the whole year, we continue to expect a figure in line with our published CHF 150−200 million goal. Earnings per share reached CHF 37 against CHF 29 in the first semester 2017.

The portfolio of GF Automotive has been enriched with the acquisition of Precicast Industrial Holding SA (Switzerland), a leading precision casting specialist in the promising aerospace and gas turbine field. As a consequence, the division has been renamed GF Casting Solutions. The long-term financing of the Corporation has also been further strengthened and strategic flexibility increased with the emission of a 10-year, CHF 200 million straight bond with a 1.05% coupon.

GF Piping Systems maintained its strong momentum. Sales grew by another 15% to CHF 947 million. Organic growth stood at 11%, reflecting a strong underlying trend in all sectors and especially for its industrial applications worldwide. The division improved its operating result by 19% from CHF 97 million to CHF 115 million, resulting in an operating margin of 12.1% compared to 11.7% in the first semester of 2017. Most plants were well loaded, the focus on high-value products, solutions and businesses bore fruits and the recent acquisitions were accretive to earnings. GF Urecon (Canada), acquired in July 2017, has been integrated very well, already developing the customized American version of the pre-insulated Cool-Fit system for the transport of cooling media.

GF Casting Solutions saw its sales grow by almost 28% to CHF 924 million, supported by a stronger Euro and the consolidation effect of the acquisitions successfully executed in 2017 and early 2018. Organic growth stood at a high 11% despite slowing growth rates in the car sector worldwide. Taking into account raw material-related price increases, the actual volume increase amounted to 9% as new light metal orders for SUVs and electric cars did come on stream and truck-related demand was quite sustained.

The division increased its operating result by 13% from CHF 53 million to CHF 60 million, but its operating margin slightly retracted from 7.3% to 6.5% as raw material price increases actually reduced profitability and the costs relating to the ramp-up of the new light metal plant in the US went up in preparation for the production start at mid-year. The light metal foundry recently purchased in Romania had a good start of the year and so had the newly acquired Precicast in Switzerland. Both companies were accretive to earnings.

GF Machining Solutions recorded a successful semester with an order intake increase of 8% on the back of strong orders received in Asia, but also in Europe. Sales grew 18% to CHF 525 million, with an organic growth of 14%. The division lifted up its operating result by 50%, from CHF 28 million to CHF 42 million, for an operating margin of 8%, against 6.3% in the first half of 2017. The new products launched in 2017 did contribute the most to these operational improvements. The connectivity software company Symmedia GmbH (Germany), acquired in September 2017, has been successfully integrated and contributes to the acceleration of our digitalization drive.

At the mid-point of its 2015−2020 strategy period, GF is well on track to successfully accomplish its targets and strategic ambitions. Growth is significantly above the 3−5% objective and operating as well as capital returns are well in line with our published objectives of 8−9%, respectively 18−22%. With a strong growth in Asia and several acquisitions executed in Indonesia, Canada and China, progress has been made regarding our presence in growth markets, further reducing our dependency on Europe.

The shift to higher margin businesses is proceeding apace, with emphasis on digital valves and sensors at GF Piping Systems, magnesium/aluminum structure components at GF Casting Solutions and machine-tools for aerospace and medical applications at GF Machining Solutions. Finally, the strong focus on customer-driven innovation is being pursued in order to anchor this important skill set into our corporate culture.

The momentum at all three divisions remains positive. At GF Piping Systems, virtually all activities show ongoing growth with industrial applications leading the way. At GF Casting Solutions, demand for light-weight structure components remains strong and the recently acquired companies are expected to contribute additional volume. At GF Machining Solutions, the order book stands at a very high level, especially in Asia and in Europe. Barring unforeseen circumstances, such as potentially escalating trade tensions, we expect for 2018 a sales growth clearly above our 3−5% objective, with operating and capital profitability fully satisfying our targeted profitability ranges of 8−9% for the ROS and 18−22% for the ROIC.

GF comprises three divisions: GF Piping Systems, GF Casting Solutions, and GF Machining Solutions. Founded in 1802, the Corporation is headquartered in Switzerland and is present in 34 countries with 136 companies, 57 of them production facilities. Its 15ʼ835 employees generated sales of CHF 4ʼ150 million in 2017. GF is the preferred partner of its customers for the safe transport of liquids and gases, lightweight casting components, and high-precision manufacturing technologies.

You will find further information at www.georgfischer.com.

You can register for our subscription service for journalists at georgfischer.com/subscriptionservice. You will then automatically receive our latest media releases.